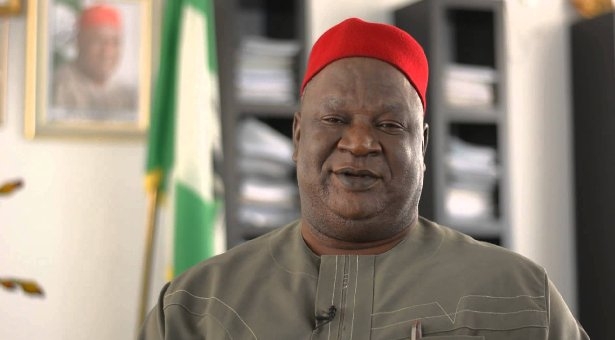 Former Senate President Anyim Pius Anyim has advocated a memorial arcade for a detailed and factual account of the Nigerian Civil War.

The arcade, according to him, will help upcoming generations to appreciate the scale and extent of the war.

He regretted that the country is yet to properly situate the lessons of the civil war in its history 51 years after.

Anyim spoke at the Nnamdi Azikiwe University, Awka the Anambra State capital where he delivered a keynote address during an International Research Conference on 50 Years Post-Nigeria Civil War on Tuesday.

The event which was organised by The Centre for Health and Allied Legal and Demographical Development Research and Training (CHALADORAT) had Nnia Nwodo; Bishop of Sokoto Catholic Diocese, Most Rev. Matthew Hassan Kukah, Ambassador Bianca Ojukwu as well as Professors Uzodimma Nwala and Akachukwu Ezigbo, in attendance.

The former Senate President explained that the memorial arcade would not only provide soothing effect but highlight war as a national tragedy that must never be contemplated.

Recommending the Rwandan experience under the leadership of President Paul Kagame, Anyim argued that nobody would have any reason to talk about honouring victims of civil war if memorial arcades were properly laid out.

His words: “51 years after the Nigerian Civil War, Nigeria was yet to properly situate the issues and lessons of that experience in our nation’s history. As at today, it appears there’s neither an official record nor memorial of the war.

“We need a detailed and factual account of the war in a sequence of events, social and economic costs, number of lives lost, details of the victims, among others.

“Such an account will help the upcoming generations to appreciate the scale and the extent of the unfortunate event.

“The resource materials and the outcomes of this conference should bridge the gap and service to ward off any reckless desire for war as its dangers will be glaring.”

Anyim, who is also a former Secretary to Government of the Federation(SGF), lamented the growing disposition of political leaders to be above the law. The behaviour, he argued, had caused a reverse growth of the nation’s democracy.

“The ‘above the law’ executive political leaders attitudes need to be evaluated with a view to measuring its effect on the desire of aspirants to political offices, particularly with the attendant rise in corruption and nepotism,” he said.

Also, Nwodo, the immediate past President of Ohanaeze Ndigbo regretted that the groups that fought the war were still in control of the nation’s leadership. He accused them of fuelling further crisis through their utterances.

He said: “We have for too long allowed the bitterness of the war and its lingering feelings to dictate our political relationships. The young men and women who were not part of the war are frustrated by the impasse.

“We do not want any more wars. We have shed enough blood without producing corresponding political results. 50 years after Biafra the time is now overripe for a fresh approach, including discussions and fruitful negotiations,” he said.

Earlier, Vice-Chancellor of UNIZIK, Prof. Charles Esimone, expressed optimism that the conference would bring about useful ideas and recommendations towards building an enduring peace in the country.